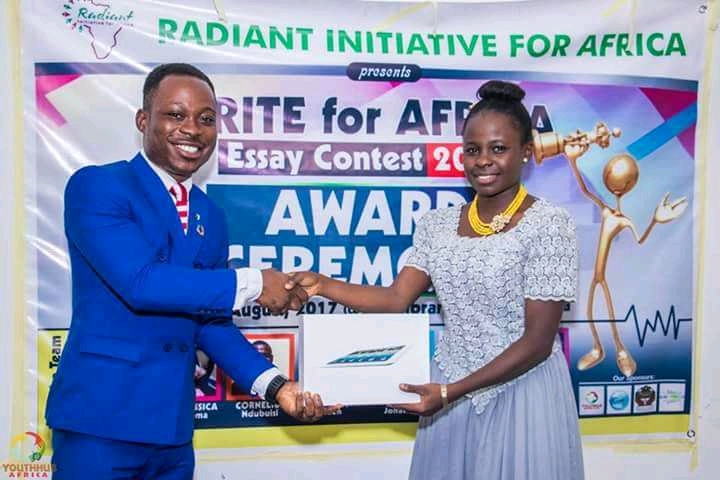 Miss Aima Oj is a university student, that is free from the expression ‘Lazy Nigerian Youths’. Join us as she takes us through her journey to greatness briefly.

DA: Can you please take us through the journey you have travelled to get here?
Aima Oj: Thanks for giving me the opportunity to tell a bit of my story.
I started writing from the age of 8 or so. I wrote a couple of fictional stories which my friends in class read and usually urged me to complete them.

I stopped writing after a few years. I don’t really know why I did but I picked up the pen again after the completion of my senior secondary school examinations and worked on a one year project that never got published.

Then in 2017, there was an audition for those who could sing, dance or perform poetry. I really wanted to audition but I had never written a single poem in my life.

Notwithstanding, I applied and I was chosen so I had to cook up two spoken word pieces in less than 48 hours. I didn’t make it past the first round but that was the beginning of my journey in poetry.

DA: Seeing as you are a multi career person, how do you manage your chosen careers carefully?
Aima Oj: Well, I haven’t really been fully active in any of the fields I engage in. I am a screen writer, blogger, fiction writer, spoken word artiste, fine artist, actor and a student of agroeconomics.

I write stories and blog when I am able to within my school schedule and I audition for movie roles as frequently as I can. My last movie shoot took place the weekend before my exams and I fell ill while on set but I guess the passion I have for what I do kept me going at that point.

And on Monday, I went in for exams
I get invited to perform/Minister at events in my school but sometimes, I have to turn them down. I understand that not every opportunity is my opportunity so I prayerfully choose those which are mine.

It also helps reduce unnecessary stress.
The first time I wrote a script for a movie was because of a competition. I wanted to enter for the competition by all means so I did my first script.

And this time, I was among the top 30 script writers chosen among 500 that applied.

DA: What challenges have you faced and how have you been able to deal with them?
Aima Oj: Challenges. There’s been a whole deal of challenges but I’ll talk about a few. At one point, I noticed my father was not really in support of my writing because one day, after dropping me off at school, he asked me, “what is the aim of all these things you are writing and posting? Are you looking for publicity or what?” And I did not have an answer for that.

I had always wanted to study medicine and become a medical doctor, own my hospital and probably even get married to a medical doctor. Along the line, I felt that wasn’t God’s will for me so I told God I was cool with whatever He chose for me and boom! I was given admission to study Agricultural Economics and Extension.

I was so bitter but I couldn’t change it due to the circumstances at the time. So my dad probably felt that writing was going to take my concentration off school despite the fact that I wasn’t studying medicine.
And then my parents have never really been fans of social media so they were against me putting up my works online most of the time.

Another is my health but God has been seeing me through.
And then the Nigerian mentality too. There are things I’d like to talk about or put in writing but I already know they could cause opposition so I stay away from entering into trouble I can’t handle. Probably when I’m a bit older and able to do some other things “big” people do, I’d write about those things.

My parents weren’t much of a challenge after I won a writing competition in 2017. I guess success is the solution to some issues.

DA: As a poet how do you get inspirations to write?
Aima Oj: Most of my inspiration comes from societal issues. I love to advocate for youths, the female gender and children and I also love to speak against vices such as rape, bullying, terrorism and the likes.

So most times when I write, it is because something has happened or is happening. And then I also get inspired to write from songs and my personal battles.
Poetry is like therapy for me.

DA: How do you balance your career with academics?
Aima Oj: Like I said earlier, I’ve never really been into any of these fields full-time. Well, I’m more into poetry than any of the others.

And because it is something I love, I just find a way to do it despite my school schedule and all. And I also have to choose which engagements are necessary and which ones aren’t.

DA: Who is/are your mentor(s)?
Aima Oj: I’ve never really had direct mentors but there are a number of people whose works have shaped mine.

DA: One word for youths that aspire to get to the top?
Aima Oj: If you want to be the best at anything, you have to get a vision, a dream. I remember after getting a “no” from one of the judges during my first audition which disqualified me from going to the next round, I said “this woman would see me on TV one day”.

A month ago, I had my TV debut I’m not sure she watched it though.
If you’re doing things because of other people, you may never get to the top because that was never your lane in the first place. So first, you have to have a deep passion for what you do.

Then dedicate yourself, your time and resources to it. And also, you have to make sacrifices for those things.

I cut my hair about two months ago due to some reasons. One was that I didn’t like sitting down for even one minute to make my hair.

Secondly, I had a project I wanted to embark on and I needed to save as much as I could because I didn’t have anyone sponsoring or supporting it. So I cut my hair to save up extra money that would have been used to pay a hairstylist, for my project.

That was one of the sacrifices I made. Well, that new look makes me look more like a spoken word artist.

DA: How can we reach you?

Aima Oj: You can reach me via Instagram and twitter @aima_oj, and on Facebook with the name, Aimalohi Ojeamiren or send me an email via sindafriday@gmail.com.